I gave a presentation to the Buffalo Python meetup group in December. My talk centered around using the Raspberry Pi as a platform for IoT and embedded development. I want to share my presentation and the resources I mentioned here on my blog.

Update I presented an expanded version of this talk to the RocDev group in January. My updated slides are here as a PDF file. The links below still apply. 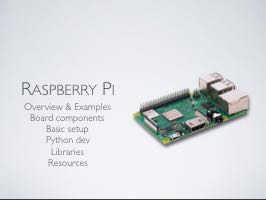 View/download as a PDF, PowerPoint, or Keynote.

During my talk, I referred to a bunch of sites and resources. These included:

Getting started with the Pi

Note: Unlike earlier models, the 3B+ has somewhat stringent power demands. You'll need a 5v power brick that has a 2.4 amps or greater output rating. That old cell phone charger you've got probably won't cut it.

Disclosure, the code here sucks and is nothing I'd show as part of a job interview. But, it gets the job done.