I'm one of those Clark Griswold kind of guys that totally over-decorates his house. To make my lights more interesting, I've built my own light animation system which I call PiLit.

Of course, all my code is free and open source. Check it out at https://github.com/skypanther/PiLit.

PiLit is made up of three components:

The player can run on any computer that supports Python and can connect to the same network as your nodes. I use a Raspberry Pi 3B+ for this. The player sends MQTT messages to the nodes with instructions of what light sequence to play. The nodes are smart devices in that they "know" how to perform various lighting functions. They listen for MQTT messages telling them what function to perform, but they do the actual controlling.

There are a few benefits, and a few downsides to this architecture. On the plus side, much less data must be passed across the network and the nodes and player can use different architectures, programming languages, etc. In other words, the player can be a lot simpler but the nodes must be a bit more complex. Another downside is that to add new lighting functions, both the nodes and player need to be updated.

I chose to use MQTT for message transport because there is very little overhead associated with the MQTT protocol. Messages are transmitted very quickly. Plus there are some great libraries for both Python and C/C++.

In PiLit, messages are basically in the form channel/payload where channel is the name of the node that should act on the message and payload is a string describing what animation to play. For example, a leaping arch node subscribed to an arch1 channel would listen for a message like this:

The message is a colon-delimited string that tells the arch what color to show, what animation sequence to play, and additional timing and control values. See the repo for details on the actual message payloads.

Nodes can subscribe to multiple channels, so a leaping arch might join both the arch1 channel and the all_arches channel. If all my leaping arches have joined all_arches then I can set them all to the same animation with a single MQTT message addressed to that channel.

Nodes as I mentioned are smart devices. They are some type of microcontroller or single-board computer running code that I wrote. PiLit currently includes three types of nodes:

For microcontrollers, you could use just about any Arduino-like board. The ESP8266s are great because they offer better specs than most Arduinos, at a lower price, and include WiFi support built in. The downside of most any of these microcontrollers is that they're 3.3V devices and the typical RGB LED is a 5V device. So, you'll need a level shifter to convert the 3.3 into 5V signals. You can generally buy 3.3V relays for on/off nodes, eliminating the need for a level shifter. 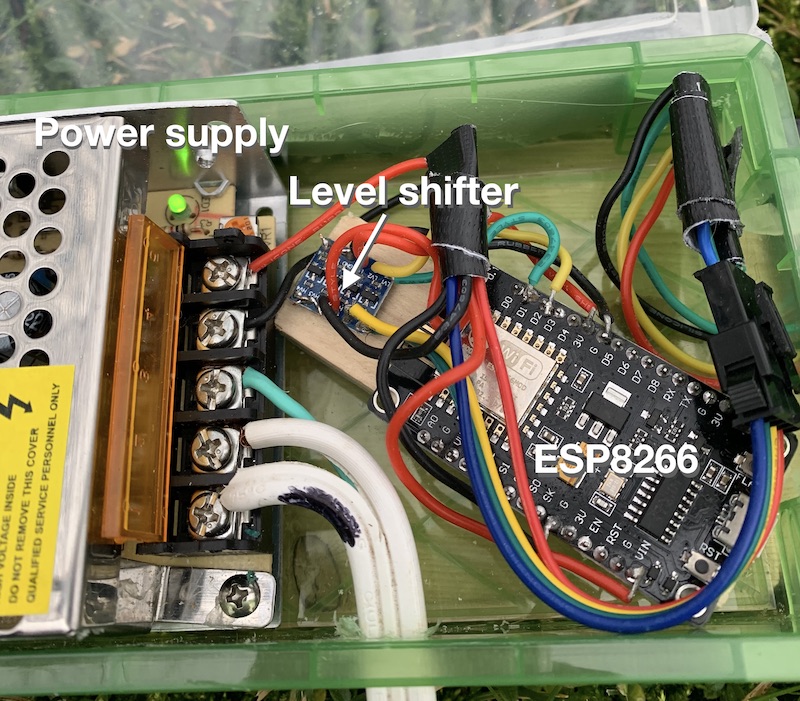 The first Christmas light device I ever created was my Raspberry Pi-based megatree controller. Using a cheap 16-channel relay board, I controlled outlets into which the strings of lights on my tree were plugged. A Python script running on the Pi turned the outlets on or off. 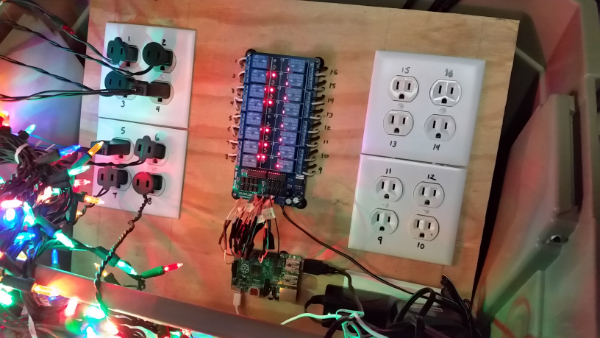 I've rewritten and updated that original script to fit the PiLit architecture. But, since I had the hardware, I kept this node as a Python script. There's no reason an ESP8266 couldn't be used instead, though new node control software would be needed.

The show-generation app is for now called PiLit GUI. It's a React web app. Basically, I needed to learn React for work so this was a great "real world" app to learn on. (In other words, don't judge the code too harshly. I'm sure I have not written the best React app here.)

This app lets you define one or more channels, each of which corresponds to a node. Then, you define a series of animations for each channel. When done, you export your show to a JSON file. This file is the script you run with the PiLit Player.

The system overall works well. The software portions of PiLit have worked out great. But I have had to deal with some physical / hardware challenges.

Keeping water out of the nodes has been a big problem. I put each in some sort of plastic container (an old food container, craft box, etc.). But of course, wires must go in and out of the boxes. Despite my best attempts, water has gotten in causing shorts. One box filled with water, then froze. The ESP8266 in that node did not like being frozen in a block of ice -- it fried. I also discovered that exterior latex caulk dissolves when exposed to constant moisture. Next year I'll use bathtub style caulk instead.

I designed and wrote PiLit, and built most of my nodes, in my spare time in September and November this year. Over the next year, I plan to refine my physical node builds to better protect from the elements. I also plan to enhance the software components. A few areas I may tackle include:

Finally, I'd really like to add an LED matrix display (to show images, video clips, and text) to my decorations. I'd also like to add an FM transmitter and audio track to my show. I will update PiLit to support those features if I can add those elements.