Computer vision is cool tech ... computer vision in an iOS app is even better! In this post, I'll describe how you can integrate and use OpenCV in your Swift-based iOS app. Before we dig in to the process, let's take a look at how the finished integration will work.

As shown in the diagram, you will continue to write most of your app in Swift as you normally would do. The OpenCV framework will be included in your app, inside a wrapper that you'll write. A bridging header will connect your Swift code to the Objective-C / C++ code of OpenCV. (You'll also add a prefix/precompile header to optimize build times.)

Once you've set all that up, you'll be able to make use of OpenCV with Swift code like:

But we're jumping ahead. There are a few steps to go through to get this all setup. Let's get OpenCV integrated and then I'll go through some usage examples.

At a high-level, you'll need to perform the following steps:

Next, either create or open your Xcode project. You'll want to arrange Xcode and Finder side-by-side and then drag the opencv2.framework bundle (special folder) into the Xcode project tree, at the top level, to add it to your project. Note: 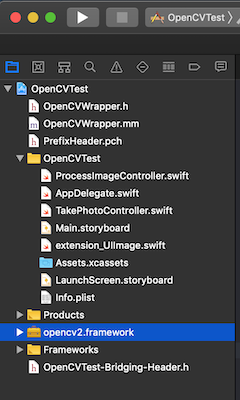 You can close Finder at this point. We'll work in Xcode for the rest of this. Next, we need to create the wrapper around OpenCV. In doing so, we'll also create the bridging header.

Open the YourApp-Bridging-Header.h file and add this line:

That's all you'll need to do inside your bridging header. With this simple file in place, you've created a bridge between Objective-C (where you'll write the actual OpenCV code) and Swift (where you'll use it).

Finally, we need to set up the prefix header. Again, there's not much that you'll need to do with this file. It will simply tell Xcode to not recompile the already-compiled OpenCV framework to speed up your builds.

Inside the prefix header, before the closing #endif statement, add:

That is, you're done! Well, you can build the app now and OpenCV is integrated. Of course you've done nothing to implement OpenCV's functions yet. (By the way, you'll get many OpenCV-related build warnings which you can safely ignore. They mostly relate to inline documentation comments being in the wrong format and won't affect your app's execution in any way.)

The basic steps you'll follow to implement an OpenCV function and use it in your app are:

Your .mm file would have the corresponding function implementation:

Per Objective-C syntax, the + indicates a class method; use - to indicate an instance method. The difference is probably inconsequential since there will only ever be one instance of your OpenCVWrapper class. So, you can probably use + to prefix all of your functions as shown above.

OK, so let's use this powerful new OpenCV capability. In your main ViewController.swift file, update viewDidLoad to call that new function:

Build to a simulator and watch the Xcode debug console and you should see OpenCV Version 3.4.4 there. Congratulations, you've integrated OpenCV into your iOS app.

I've created a simple project so that you can explore something a little more meaningful. This app lets you take a picture (so you'll need to run it on a device) and then apply some OpenCV manipulations.

Make sure to explore the .h and .mm files, as well as the ProcessImageController.swift file in this project. Also check out the UIImage extension. Together, these should give you a good start on writing your own OpenCV functionality.

You'll need to write your OpenCV code in Objective-C (that's what's in the .mm file). But as best as I can tell, there is no specific OpenCV-for-iOS documentation. For the most part, any C++ OpenCV sample code you find will work without much modification. From there, I'm sorry to say you'll have to turn to StackOverflow and Google and hope.

I've found OpenCV's functions to be typically much faster than the equivalent Swift implementations. For example, converting an image to grayscale is considerably faster with OpenCV. But test, because some OpenCV operations are slower, sometimes surprisingly so. Blurring an image, for example, is many times faster in Swift than in OpenCV.

But, avoid passing images back-and-forth between Swift and OpenCV. You'll need to change data formats (e.g. from OpenCV Mat to UIImage or CIImage) which can be quite slow and you may encounter memory leaks. Instead, do all the processing you can in one layer or the other and pass only the final result between layers.

Images you capture from an iPhone (and presumably iPad) camera can be appear to be turned upside-down by OpenCV. In fact, it's just a different way of handling the orientation information in the files. Check out the UIImage extension that I've included in the sample project above. As you'll see in that project, you can get a correctly oriented portrait image by simply accessing the normalized property of the image, like this: OpenCVWrapper.convert(toGrayscale: img.normalized!)